The State of Kuwait is distributed into six governorates, which are the Capital, Hawalli, Al Farwaniya, Al Ahmedi, Mubarak Al Kabir and Al Jahra.
Since Kuwait is located in a desert region, the climate is continental distinguished by long hot dry summers and warm short winters with occasional rainfall. Sandstorms often occur during the summer months.

The population of Kuwait was estimated at 3,268,431 persons according to the Central Statistical office on June 30, 2012. In this census, the number of Kuwaitis reached 1,128,381 while the rest were non-Kuwaitis and foreigners.

The currency in the State of Kuwait is the Kuwaiti Dinar. Kuwait is +3 hours from GMT. 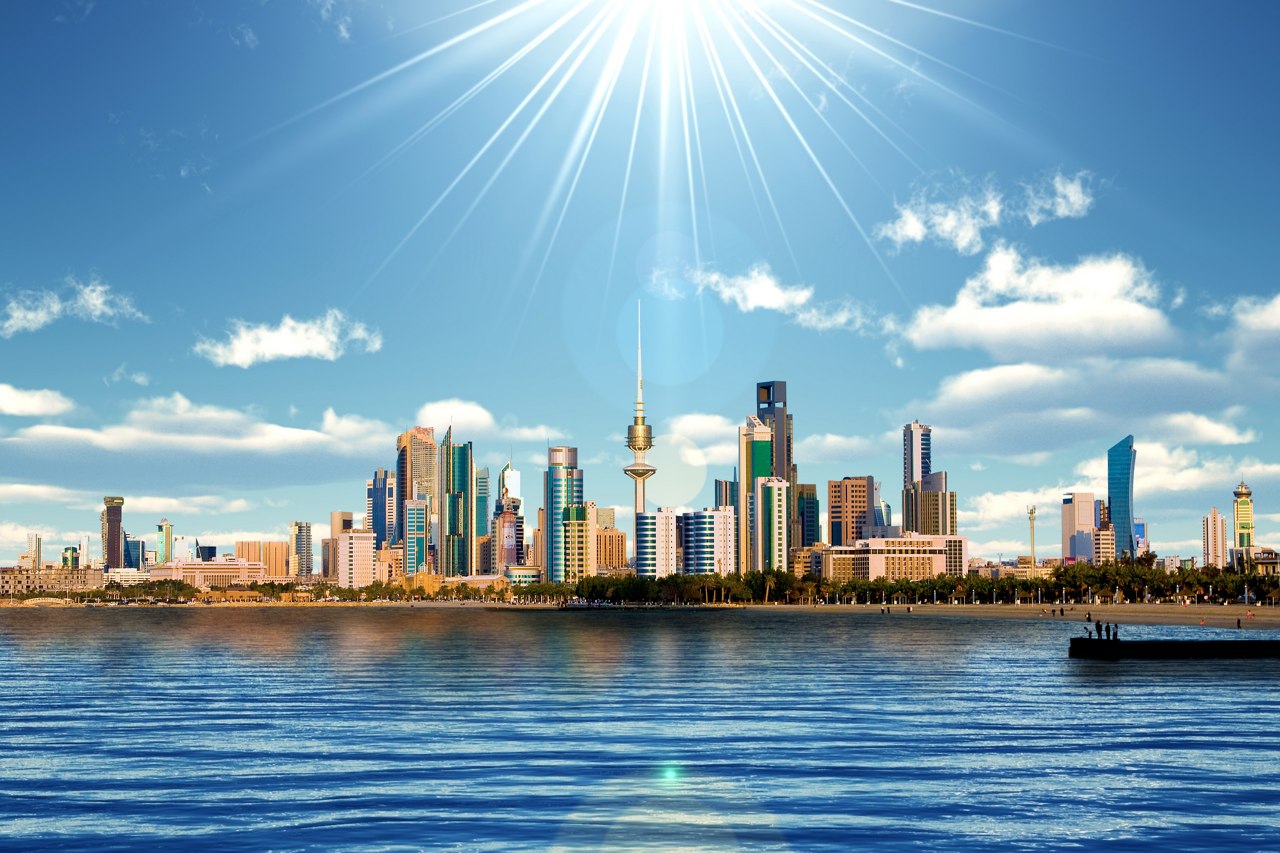 Kuwait lies between the latitudes 28.45 and 30.05 degrees, north of the equator, and the longitudes 46.30 and 48.30 degrees, east of the GMT. Hence, it is situated in the geographically desert zone which is marked by a continental climate. This climate is characterized by its long Summer and short Winter. During Summer, temperatures are usually high and weather is dry. During Winter, temperatures become warm and rain occasionally falls.

Regarding temperatures, they range between 45°C in the summer and 6°C in the winter. This great divergence in temperature degrees is accompanied with many differences in the annual rates of rainfall, ranging between 22 mm and 352 mm. The highest temperature registered in Kuwait was 51°C, in July 1978, while the lowest was -4°C, in January 1964.

Kuwait provides its visitors and tourist's enormous opportunity to reside and enjoy many magnificent hotels and resorts. You can enjoy residing in elegant fashionable rooms either furnished according to the modern or the old fashioned style. You can, also, practice water sports at the resorts and hotels bordering the Arab Gulf and at its provided sports halls. That is in addition to a collection of international restaurants where you can enjoy great meals.
Regarding temperatures, they range between 45°C in the summer and 6°C in the winter. This great divergence in temperature degrees is accompanied with many differences in the annual rates of rainfall, ranging between 22 mm and 352 mm. The highest temperature registered in Kuwait was 51°C, in July 1978, while the lowest was -4°C, in January 1964.

Kuwait has many museums, most notably Bait Al-Othman Museum, Maritime Museum, and Museum of Modern Art

You can enjoy a pleasant one-day trip by taking a boat to one of Kuwait islands, such as Kubbar. On the island or the boat, you can enjoy your time picnicking and swimming. You can also go fishing using trawls. You can, also, rent a dhow for a hundred (100) Kuwaiti Dinars. This includes crew and all running costs. These kind of trips is ideal for outings of a small office, or three or four families.

Kuwait is distinguished by its various water sports and activities, like speed boating, windsurfing, jet skiing, water skiing, yachting and scuba diving. In order to practice any of the water sports in Kuwait, tourists have to buy their own equipment from dealers. Usually, renting facilities in Kuwait are few, and boats and equipment have to be bought for long-term enjoyment. From these dealers, you can, also, get all the required have details about water sports clubs and training courses available in Kuwait. Water sports can be enjoyed off the beaches all along the coast.

Kuwait is the paradise for sailors. The sea offshore is seldom really rough, and there is nearly always a moderate breeze. Boat types and sizes range from small sailing dinghies to large yachts. Kuwait has established the Yacht Club which has a marina with 300 fully serviced berths. In addition, there are many sea clubs that have marinas and organize many sailing activities. Kuwait Offshore Sailing Association (KOSA) organizes sea races, including the race that begins in Kuwait and ends in Bahrain.

Despite the pollution resulted from the retreating Iraqi troops and setting the oil wells afire, Kuwaiti people were able to purify the sea. Today, the seas around Kuwait are comparatively clear and marine life is thriving. Scuba diving is one of the most popular sports in Kuwait. This sport is practiced much over reefs offshore and around the islands. Moreover, training courses are provided by SSAC and PADI. Al-Boom Diver Center offers certifications through NAUI and CMAS and organizes many diving trips.

Pearls, in the past, were the main source of wealth in Kuwait and not oil. Today, annual pearl diving festivals are held to help younger generations feel excitement and hardship faced by their forefathers. These festivals are a tribute to men who spent their lives searching for pearls. The young divers make extensive preparations and arrangements for the event; they are submitted to rigorous diving and sailing training, meet experienced captains and old divers and listen to them explaining the intricacies of pearl diving, and familiarize themselves with the necessary equipment. Previously, sailboats or dhows were prepared first by pulling them along the shore. Then, any cracks were caulked with cotton dipped in shark oil. Finally, the body of the ship was manually smeared over, up to the water line, by a thick coating of noora (a mixture of shark oil and powder). These dhows were made of Indian teak. This teak is made waterproofed by using the traditional mixture of sheep oil and lime. Today, costumes of pearl-divers are the same as their forefathers'. They wear the wazar, which is a wrap-around skirt that also serves as a head wrap, along with diving trunks and T-shirts. Fishermen, also, wear the fotam (nose-clip), dieng (neck basket) and hajer (toe anchor). When diving, the diver is secured to the ship's railing with a rope tied around his waist. Each diver has a helper who remains on the surface holding the rope all the time. Once the diver is ready to surface, he tugs on the rope, then, his helper pulls him up. The end of the festival is celebrated in an atmosphere of folk singing and dancing.

Other than zubaidi and hamout, Kuwait waters is rich of fish of all shapes and kinds. Kinds of fish range, including six different types of shark, two types of barracuda, stinging and non-stinging ray fish, four varieties of mackerel and tuna, and an array of soles, snappers, breams, rock and cat fish, cobias, flounders, needlefish and puffers. You can go fishing by standing on prominent rocks with sophisticated long casting rods, or at the ends of piers using simple poles, lines and hooks. You can , also, fish using wire baskets to catch fry from the water off the beaches using nets held by several persons. If you are fishing from boats, you can use trawls and multi-hooked lines. Despite the fact that many experts use home-made fishing equipment, you can buy simple and sophisticated fishing tackle from shops.